The Sisters of Perpetual Motion 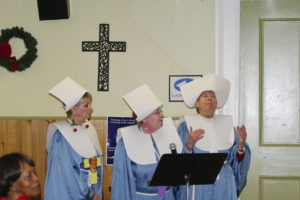 During xxx the Spring and Summer of 2008, several women from our church initiated some
long-term clean-up and beautification projects which involved lots of inside painting and
outside yard work. We referred to ourselves as the ‘Lutheran Ladies Labor League” and
we remarked that our old church required constant effort, as well as perpetual and
dedicated labor. The Sisters grew out of our attempts to put those needs into a
humorous context. Consequently, Sister Klutzamus Maximus (Linda Connors) was “born”
as the tool-savvy but accident-prone Sister, and Shirley Mowell became Sister
Florious Glorious, who is “green-thumbed” but simple-minded. As Sister Brunhilde,
(Carol Reichert) says, “Sister Florious Glorious is a few books short of a Bible.”
The back story on the Sisters is that they are the last three remaining members of a 500
year old German Lutheran order of nuns begun by Katarina von Bora, the hard-working
and long-suffering wife of Martin Luther. The sisters take four vows, including the usual
three of poverty, obedience and chastity (the one Sister Florious Glorious is always
forgetting.) They then take an additional vow of perpetual motion. Since they must keep
moving anyway, they offer their services to the old German Lutheran Churches, which
are always in need of upkeep and repairs.

The reality of their genesis , however, is that when the Sisters appeared in the Spring of
2009, our congregation was going through a very difficult time, and we were in serious
need of morale-boosting. We were without a full-time pastor, and spirits were low. We
needed some laughs, and the Sisters did their best to provide them.

They began to appear at church dinners, bringing with them their bizarre mixture of
music and mayhem. Who can forget their inspired line of undergarments called
“Nunderwear?” Understanding the importance among Lutherans of a “firm foundation,”
they offered the ever-popular “Wunderbar Wonder Bra.” In adding music to their act, the
Sisters added another character, the perpetual novice, Hemiola Fermata, who while
musically very gifted, is a martyr to Manischewitz.

The Sisters, whose costumes were created by Linda, are occasionally joined by the
choir of the Brothers of Perpetual Silence. You will all remember their very moving (with
signs!) performance of the “Hallelujah Chorus.” Then there are also occasional guest
appearances, such as that of Pastor Deborah, who as the Mother Superior . sang
“Climb Every Mountain” in the Sisters’ production of “the Sound of Music, “ in which the
hills really were alive.

Suffice it to say, the Sisters have a good time, and they hope that their audience does
too.. Remember, it was Martin Luther who said, “If I am not allowed to laugh in Heaven,
I don’t want to go there.” The Sisters of Perpetual Motion say, “why wait for Heaven?”

And now a couple of videos for your enjoyment?

Sisters get a new Mission